An Atonement of Shame – Orthodoxy and the Cross


Some decades ago in my early (Anglican) priesthood, a parishioner brought a crucifix back from South America. The question for me as a priest was whether I would accept the crucifix as a gift and place it in the Church. I like crucifixes, my taste was always towards the Catholic direction. But, you have to bear in mind that Spanish/Latin crucifixes have a tendency to be, well, rather gory. My congregation was pretty straight-up WASP. But, I was young, a still largely unbruised banana, so I installed the crucifix over the rear door of the Church. Everyone could see it as they exited.
The first Sunday was the test. I got my clock cleaned pretty quickly. An irate woman said, “I want that thing removed! I do not want my children seeing it. I believe in a risen Lord!” We had a short theological discussion the outcome of which was that I left the crucifix where it was. I do not think she adjusted. I also do not think her children were scarred for life.
But I understood her sensibilities. The brutality of the crucifixion is easily overwhelming. It is particularly overwhelming if the brutality is depicted in Spanish splendor. My defense of the brutal crucifix, however, did not prepare me for my later encounter with Orthodox presentations of Christ on the Cross. 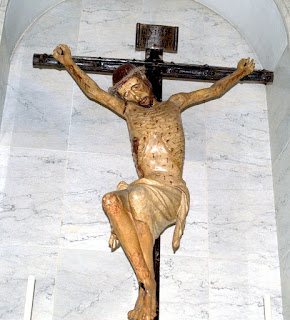 The "Crucifix of Nicodemus" (15th century). The anguishing vision of pain and death typical of medieval Spanish style.
Like all Orthodox icons, the Crucifixion is somewhat stylized, conforming to the norms of Byzantine grammar. It is a theological rather than historical presentation. Typically, the icon presents a very calm Christ on the Cross. He is clearly “dead” (His eyes are closed). But there is no particular sense of agony. The suffering is more a note of sadness rather than pain. And, contrary to history, the plaque over the Cross reads: “The King of Glory.” As glory goes, it is indeed subdued. There is a profound stillness that comes with it. 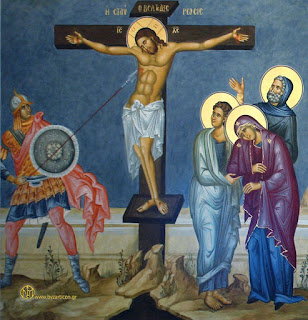 The icon of the Crucifixion could also be placed with two other icons that are common to Orthodox Holy Week: the icon of “The Bridegroom,” and the icon of “Extreme Humility.” The portrayal of Christ in both icons is similar. He is seen with head bowed, arms folded in a dropped position in front of Him. It is a picture of submission and acceptance. The Extreme Humility makes a certain obvious sense: it is Christ in death. The wounds are obvious; He is seen in the tomb; the Cross is placed behind Him; the spear and the sponge are there as well. Indeed, the placement of the hands are reminiscent of the hands on the Shroud of Turin.

If Christ in death is extreme humility, then Christ as Bridegroom is extreme irony. For the term “bridegroom” is a title for Christ associated with His coming in glory (Matt. 25:1ff.) The Orthodox focus on the Bridegroom, however, is a Holy Week devotion, a call to repentance. On the first three days of Holy Week we sing with great solemnity:
Behold, the Bridegroom comes in the middle of the night!
And blessed is the servant whom He shall find watching,
And unworthy is the servant whom He shall find heedless.
Beware, therefore, O my soul.
Do not be weighed down with sleep, lest you be given unto death,
And lest you be shut out of the kingdom.
But rouse yourself crying, Holy, Holy, Holy art Thou, O God.
Through the Theotokos have mercy on us!


This is the Great Irony: the Great becomes small; the Rich becomes poor; the Mighty becomes weak; the Author of Life enters death; the God of All becomes the servant of all. This same irony lies at the heart of the Christian way of life. It strikes down every pretense to power and exalts the emptiness of humility as the fullness of being.
Of great note, however, is the absence of pain and torture in this presentation. The theme of the Orthodox account of Christ’s suffering and death is that of bearing shame and mockery. You can search the texts of Holy Week for the word “pain,” and come up with almost nothing. The mocking and the shame, however, color everything.
The same is largely true of the New Testament as well. When St. Paul describes Christ’s self-emptying (kenosis) on the Cross, he says that Christ “became obedient to death,” and adds, “even death on a Cross.” The point of the “even” is not that the Cross is painful above all pain, but that the Cross is shameful above all shame. There are no gospel accounts of characters taking some sort of masochistic pleasure and delighting in Christ’s pain. However, there are repeated descriptions of His humiliation. The purple robe, the crown of thorns are not unique images of pain, but torturous bits of mockery.
All of this runs counter to the penal theories of the atonement. In those theories, Christ is punished on our behalf. It is His pain and suffering as sacrificial victim that come to the fore. What Western (cf. Spanish) art did to the Crucifixion, Western rhetoric did to the atonement. The Reformation did nothing to change this other than to avoid its artistic presentation in Churches (it looked too “Catholic”).

But what role does shame play within an understanding of the atonement? It is, I think, essential, though hard for us to understand. America has been described as a shame-based culture where shame itself is not acknowledged (it’s too painful). It helps if we understand the nature of shame itself.
Shame is the natural response to broken communion. [footnote] The relationship of communion with others is the very essence of safety and comfort. Its most primal expression is the bond between mother and nursing infant. Face-to-face, the child is held and nurtured. There the child is comforted and protected. [footnote] Every later experience of union draws on this primal experience. It is not accidental that the ultimate relationship, that of union with God in Christ, is described precisely in the language of face-to-face.
The first instinct of shame is to look down, to turn the face away and hide. Blood rushes to the face (it “burns with shame”). Shame is the very sacrament of broken communion, the most proper and natural expression of sin. When Christ enters our shame (and bears it), it is as though God Himself stands before us, takes our face in His hands, and turns our eyes back to Him. This is the action we see in the parable of the Prodigal Son. The Father’s actions demonstrate his running to meet his son in his shame. Had the father remained in the house, the son would have born his shame alone. The father not only shares the shame, but in sharing it, restores communion, illustrated by the robe and the ring. Even the shame of the elder son is met with the same meekness and shame-bearing.
The shame that we experience in the natural settings of our lives is an image of something truly and ontologically real: sin shatters our union with God. Christ’s incarnation is an entrance into this realm of ontological shame and brokenness through union with our human nature. That reality is made manifestly clear in the events of His passion and the description that has come down to us.
Pain and suffering are tragic parts of our lives. They are the burden of our mortality. But far deeper and more profound is the shame that represents our ruptured union with God. Pain and suffering are only symptoms.

The Orthodox portrayal of Christ in the events of Holy Week clearly reflect the themes found in Scripture. It is only in understanding Christ’s bearing of shame and mockery that we will fully understand what has been done for us in His death and resurrection. Our culture, as noted above, has an aversion to shame (it’s one of our greatest secrets). We have somehow come to prefer stories of violence. Our cultural treatment of the Cross majors in violence. But nothing sinful can be understood apart from the role played by shame.
In the Ladder of Divine Ascent we hear: “Shame can only be healed by shame.” As difficult as this is for us, it is the place of atonement and exchange that Christ has set. I have been learning recently, however, that to speak of “bearing a little shame” (in the words of the Elder Sophrony) is overwhelming to some. Popular shame researcher and author, Brene Brown, uses the term “vulnerability” when she speaks of confronting and healing shame. Vulnerability, at its core, is nothing other than “bearing a little shame.” It is the willingness to be real, to be authentic with the risk that it entails. This is on the psychological level. There is a deeper level, though we cannot really go there without enduring the psychological first.
God give us grace to be vulnerable in His presence, vulnerable enough to discover our true selves.

Heaven & Hell in the Afterlife Acc. To The Bible

Salvation and atonement (& The significance of the “Antilytron”)
Basic Points of Difference between the Orthodox Church and Roman Catholic Church
The Road to Rome? Why Orthodoxy Deserves a Look
I love the Pope & the Roman Catholic faithful, but...
The Days of the Schism of 1054
Roman Catholics (tag)
Protestants ask: Why be Orthodox?
"THE WAY" - An Introduction to the Orthodox Faith
Theosis (deification): The True Purpose of Human Life
Roman Catholics met Orthodoxy (blog)