On the Mother of God

“The Most Holy Mother of God prays for us ceaselessly. She is always visiting us. Whenever we turn to her in our heart, she is there. After the Lord, she is the greatest protection for mankind. How many churches there are in the world that are dedicated to the Most Holy Mother of God! How many healing springs where people are cured of their ailments have sprung up in places where the Most Holy Theotokos appeared and blessed those springs to heal both the sick and the healthy! She is constantly, by our side, and all too often we forget her.” ~ Elder Thaddeus 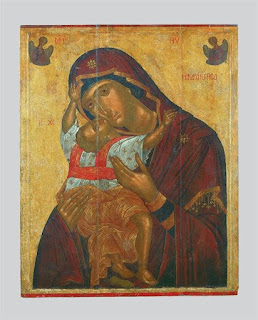 As we prepare our hearts for and then commemorate the Feast of the Dormition of the Holy Mother of God, let us take some time to think about Mary, the Theotokos. What can we learn from her love for God and her submission to His will? How did her choices and the way that she lived her earthly life affect ours? How does she continue to impact the world since her Dormition?
The All-Holy is conceived, as an offspring of prayer, from the Holy Joachim and Anna, her parents, surpassing the laws of nature (because her mother was barren and old, when she conceived). The Conception of the All-Holy in the womb of Saint Anna is celebrated on December 9th.

At the age of three, her parents offer her to God, and give her into the hands of prophet Zacharia, the high-priest, at that time at the temple of Solomon, and later to be the father of the Honored Forerunner, who takes her in the Holy of Holies of the Temple of Solomon, by God’s command. The Entrance of the All-Holy into the Holy of Holies is celebrated on November 21st.

The All-Holy, remained there enclosed for twelve years, until she became 15 years old. At all this time, she was nurtured, daily with the heavenly bread, by the hands of Archangel Gabriel. She lived surpassing the laws of nature, and she was devoted to ceaseless prayer.

At the age of 15, prophet Zacharias by God’s command, takes her out, and betroths her, delivering her, for protection, with the righteous Joseph, of whom the rightful wife had been diseased, and where he had have with her sons and daughters. Joseph, takes in the All-Holy and places her in his home in Nazareth.

After four months of her arrival there, and 6 months from the Conception of the Honored Forerunner in the old womb of Elizabeth, the Annunciation takes place, by Archangel Gabriel (Luke 1:26-27). The Annunciation of the All-Holy is celebrated on March 25th.

Simultaneously, after her consent to the message of the Archangel, the seedless and inconceivable conception of our Lord Jesus Christ takes place, by the Holy Spirit, in the womb of the All-Holy (Luke 1:38).

There, in Bethlehem, the All-Holy gives birth to Christ, in a manger, ….above the laws of nature (Luke 2:7). The Nativity of Christ is celebrated on December 25th. There the shepherds of the sheep came to venerate Christ (Luke 2:16).

Far away not, in Persia, as soon as Christ was born, a strange star appeared in the sky. The Magi, looking at it carefully, they began following it until Judea of Jerusalem (Mt. 2: 1-2). This voyage lasted about two years.

In the mean time, after Christ’s birth, the All-Holy with Christ and Joseph remained in Bethlehem until the time came for the purification according to the law of Moses (Lk. 2: 22). The presentation of the Christ into the Temple is celebrated on February 22.

After the Presentation, Joseph takes the All-Holy and Christ into His house in Nazareth.

When the Magi arrived in Jerusalem, they asked where Christ was (Mt. 2:1). Herod is sending them to Bethlehem (Mt. 2:8-9). There, in Bethlehem, the star leads them over the place where the All-Holy and Christ were staying, and where the Magi worshiped Him, as God and King, in that house (Mt. 2: 9-11).

When the Magi departed, Joseph and the All-Holy with Christ, depart to Egypt during the night of the same day (Mt. 2:14). After few days, Herod sends his soldiers to Bethlehem and the surrounding region and slaughter the babes (Mt. 2:16).

Joseph with the All-Holy and Christ remain in Egypt until the time of Herod’s death (Mt. 2:19). There they remained for three years at the Helioupolis of Memphidus.
Later, they returned to Nazareth permanently, until the time when Christ became thirty years old (Mt. 2:23; Mk. 1:9; Lk. 2:51 and 3:23).

During this time, every year they were coming in Jerusalem for the Feast of the Passover (Lk. 2:41).

After the Crucifixion of Christ, Apostle John, the Theologian and Evangelist, takes the All-Holy to his house, in Jerusalem (Jn. 19:27), after taking the responsibility of her protection, given to him by Christ (Jn. 20:27). This house was her permanent abode until the time of her blessed falling asleep.

During Pentecost again, the All-Holy is with the Apostles, the twelve and the seventy.
The tradition of the Church states, that the All-Holy went to Cyprus and as far as to Mt. Athos, during her earthly life.

The All-Holy fall asleep at the age of 59. She was buried in the garden of Gethsemane, in Jerusalem, from where she was resurrected in three days, and immediately she was translated into the heavens with her body, in the same manner like Christ.

Mary: The Blessing of All Generations

The Vindication of the Mother of God

The Feast of the Dormition of the Theotokos (August 1 - 15), a celebration of the life and victory over death!

August: the holy month of the Virgin Mary in the Orthodox Church !