The Bread, The Wine, and The Mode Of Being (& the ancient terror of the pandemic) 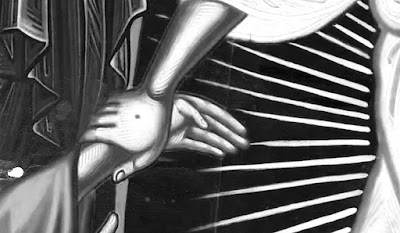 Death to the world - The Last True Rebelion (about)

The recent reappearance of the ancient terror of a pandemic has prompted fertile conversation among theologians and literary people across the world. Various opinions have been articulated, such as that disease can be transmitted through the current way of distributing holy communion, or that the Eucharistic Gifts themselves can be bearers and transmitters of pathogenic germs. It is said that since the bread and the wine do not alter their essence and essential properties, it follows that they are subject to decay and can also spread toxic viruses. This idea has supposedly found Christological grounds as well in that the human body of Christ is a carrier of germs which can be harmful to us, though not to Him; after all, germs themselves are not bad, since there is nothing bad in creation.

Within this framework the following evidence drawn from the writings of the Fathers might be relevant and useful.

Undoubtedly, there is nothing bad in creation. No form of life, nor even natural destruction can be considered as bad, because evil is only that which alienates us from God. However, at the same time one should not ignore or deny the products of personal sin, such as, for example, a dangerous laboratory hybrid, as well as the effects of the ancestral Fall, namely decay and death, to which the human being has been submitted. Now, God’s incarnation manifested something entirely new in the world.

Let us open a short parenthesis to delineate the Orthodox belief regarding the Eucharistic elements. Do we hold that they are merely a representation of the Lord’s presence in the congregation, as is the general understanding in Protestantism? In this case, the holy bread could be offered in sterilized bags and the holy wine in certified sealed bottles. If, on the other hand, in accord with the Roman Catholic doctrine of transubstantiation, the holy gifts are Christ with respect to their essence, then either we must commit ourselves to worshipping the gifts or fall into unbelief when thinking they can be corrupted.

The Greek Fathers speak neither of transubstantiation nor symbolic function but of the ‘change’ of the material elements. This ‘change’ signifies a new mode of being, inaugurated through the appearance of God in the flesh. Here we must consider the patristic distinction between the logos of nature and the mode of existence, a distinction which is useful for an Orthodox approach to the mystery of Christ.

The Fathers use this distinction as a tool for explaining God’s miracles in history. When God intervenes to perform a wondrous act, He does not alter the nature of things — that is, their logos or principle; instead He innovates the manner in which their nature operates, so as to fulfill the divine economy. The innovated mode means nature operating beyond its own ordinance, beyond its limits, translating the human being “into another form of life”, as for instance when Noah remained unharmed amid wild animals and holy men would walk upon the waters. 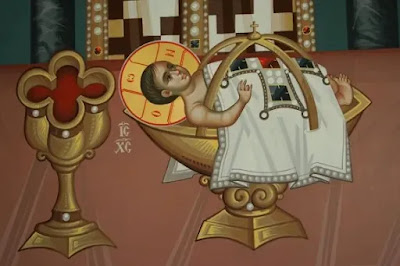 The Incarnation was the climax of all divine interventions. The incomprehensible mystery that took place in the Logos Incarnate was the indissoluble union of divine and human nature. Such union meant the exchange of the natural properties in Christ, in the same way that a blade becomes fire when thrown into fire while at the same time fire acquires a sharp edge. Human nature remains intact while its mode of existence is altered. This is why Christ was born both in a divine and a human way, that is, carried by a woman, yet without labour pains and corruption. He was not subjugated to nature; instead, elevating it to Himself, He made nature “a transcendental mystery” Christ’s human nature operates in a divine mode, and it operates in a divine mode because it carries the fullness of divine activity.(1)

This same reality and understanding can be applied to the Eucharistic mystery. Here also an alteration of the material elements takes place. Neither is their logos or essence changed, nor their natural properties, but their condition and conduct, that is, their mode of being. Just as in Christ everything human has a transcendental mode, since human nature in Him has the fullness of divinity, so the Eucharistic Gifts receive and transmit to its participants the same theandric activity of Christ. We partake, therefore, not of something that is subject to decay and deterioration, but of God Himself, through matter that has become life-giving, as the very flesh of Christ is life-giving.

Clearly, authentic communion has to do not only with the presence of Christ in bread and wine but also with His presence within us. Union and assimilation with God is not accomplished without the good resolve (prohairesis) and synergy of man, nor is it exclusively fulfilled in the Eucharist.(2) We need to follow and wholeheartedly imitate Christ freely and be born in the Spirit. Divine activity operates in various inscrutable ways according to the measure of each one’s faith and longing.

Thus, when Christ is offered as bread, He does not alter the nature of bread but its ‘economy’. Christ’s human nature was passible, yet, one with the Divinity, and for this reason it could not be seized and possessed by death. And as His body was dead and risen, since it was never detached from Divinity, similarly, when we receive this body we foretaste the resurrection. Just as Christ suffers as a human being, yet acts as God, in the same way the consecrated elements, though subject to ‘suffering’ and corruption, act upon us as uncreated divinity. As St Cyril of Alexandria says,

The body of Christ is holy and has the power to vanquish every illness. It was and is holy, not merely as flesh with its natural powers, but as the temple of the indwelling divine Logos, who sanctifies His flesh with His Spirit. This is why Christ vivifies the daughter of the leader of the synagogue not only through His omnipotent command but also with His bodily touch. (Αναστασίου, Doctrina Patrum, σ. 129, 131-32)

Therefore, to those that receive communion with faith and true repentance the Lord’s body becomes a ‘safeguard’, ‘for strength, healing and health of soul and body’, maintenance and deification of human nature.(3)

The consecrated elements operate as the deified body of Jesus. Through matter God grants life uncorrupted. And although immortality is an eschatological condition, and we shall all, sooner or later, cross to the other side of the bank, yet ‘doses’ of incorruption are given in this mortal life according to the measure of each one’s faith, longing, godly fear and love.

Fr. Chrysostomos explains that just as Christ suffers as a human being, yet acts as God and rises from the dead, in the same way the consecrated elements (Holy Communion), though subject to ‘suffering’ and corruption themselves, act upon us as uncreated divinity in order to transform and perfect our fallen nature, not to change us from being physically corruptible, but to enable us to become partakers of the divine nature (2Peter 1:4), even in the here and now.

Therefore, to those who receive Holy Communion with faith and true repentance the Lord’s body becomes a ‘safeguard’ ‘for strength, healing and health of soul and body’, maintenance and deification of their fallen human nature.(3)

The consecrated elements in the Holy Eucharist operate as the deified body of Jesus. Through corruptible matter, God grants life uncorrupted. And although immortality is an eschatological condition, and we shall all, sooner or later, cross to the other side and receive it in its fullness, yet ‘doses’ of incorruption are given to us in this mortal life according to the measure of each one’s faith, his/her longing and godly fear and love.We are transformed into a different mode of existence by the touch of Christ’s Body and Blood.We are sanctified and deified by being united with Him.

The Chalice and Spoon of Holy Communion are also changed as they come into contact with Christ’s Body and Blood. They are transformed to a different mode of existence; they are sanctified. Their nature is not changed, but, rather, in the same way as a blade becomes fire when thrown into the fire . . . the Chalice and the Spoon are also changed and sanctified. Their mode of existence is altered so that they may transfer life to us, just as his garment heals the flow of blood in the woman when she touches it, just as the sea is calmed by the touch of Christ for the safety of the disciples, just as the daughter of Jairus and the son of the widow are brought back to life by the touch of Christ.

The Body and Blood of Christ, along with the sacred vessels (the Chalice and the Spoon) utilized to deliver it to us cannot be a threat to our bodily health if we approach with the “Fear of God with Faith and with Love.” On the contrary, they will lead us to healing of soul and body and eternal life as they deliver to us the healing, salvific touch of Christ.

Hence, as we return to Holy Communion, let us surrender in faith to God’s Mercy and Forgiveness and ask that He may restore us again in His good favor, and protect us from disease, calamity and eternal condemnation.

COVID-19 is a tribulation (δοκιμασία), a test to our faith. The only way to overcome tribulations is by surrendering to God’s Love and Mercy completely and unconditionally in faith and trust. Holy Communion is the place to do that, even as He is offered to us through the shared Chalice and Spoon.

(3) John of Damascus, Exposition of the Orthodox Faith, 87. Also see Prayer before the Holy Communion, and Gregory of Nyssa, Catechetical Oration, 37.

Governments evicting God – from inside the Christian Chalice? / Is Holy Communion safe to consume? - A compilation dedicated to answers provided by medical specialists