Congo: Prostitute baptized an Orthodox Christian two hours before she passed away... 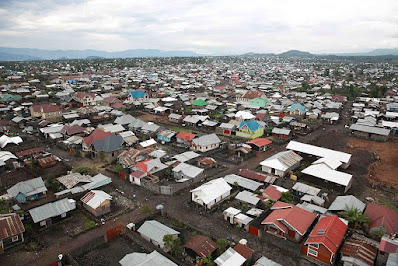 Goma, the capital of North Kivu province in the eastern Democratic Republic of the Congo (from here)


From the Mission in Congo, by the Missionary Society "Saint Kosmas the Aetolian" of Thessaloniki

“...It was six in the afternoon. It was already dark when a young woman unknown to me was knocking persistently on the door of my house waiting for me to open it. I responded, and I asked her what she wanted.

-Father, are you afraid of me?'

Her face was much calmer than before. She again departed without a word, with her head bowed down. 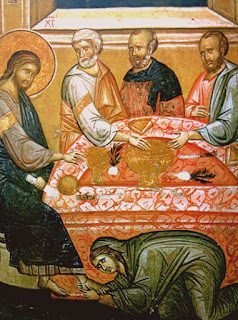 Three days passed and she once again came to me, late at night. When I read the blessing over her, I asked her to not come so late. She looked at me and I noticed her eyes were full of tears... She said to me:

-Father, I am a prostitute, this is my job. I do not move about during the day, because everyone knows who I am and I am ashamed to be seen in public. That's why I came and came again in the evenings.  I come to you because I feel good when I enter the Church. I want to tell you that the first time I came here, I felt an inexplicable force inside me and that night I did not sin. I have nothing to do with the Church, nor am I Orthodox.

After that, she departed and I never saw her again. Sometimes I would ask the church guard if he had seen that young woman circulating in our city, and he always replied in the negative.

Six months passed, and one afternoon she came again, this time her body supported by a friend. She smiled when she saw me. I recognized her immediately. I brought her in, and made her lay down on a bench that we had in the Church. As her friend explained to me, she had asked for her help, saying:

I looked at her and she said:

-Bless me, Father, bless me.

I immediately thought of something, so I asked her:

-Do you want me to baptize you, to become a Christian?

-Yes, Father, you will give me much joy if you baptize me. God will help me.

I began the preparations for Holy Baptism. I also gave her a baptismal gown, and she put it on. After reading the Catechism, I baptized her, “In the name of the Father and of the Son and of the Holy Spirit”, and I gave her the name Georgia. I also put a Cross around her neck; then I brought out the portion of Holy Communion that is kept in the Artophorion and she received Holy Communion. Her face was calm and happy.

-Father, I thank you very much. I give glory to God for this moment, which made me worthy to be baptized. The doctors were tired of my illness and they told me to go home. I beg God to forgive me for everything that I have done in my life. Please, father, I want to take this baptismal gown with me, so that they can dress me with it when I die. I do not want anything else!

I was amazed at hearing these words and gave her the gown. Her friend thanked me, she took Georgia and they departed. As they left, I looked at the time: it was 6:30 in the afternoon. Two hours later, I was informed that Georgia the prostitute had fallen asleep! God had called her into His heavenly Kingdom!

Our God is just. He had prepared her in a way that our mind cannot grasp. People spoke very badly of her; everyone regarded her as garbage - but not her Creator. We buried her, wearing her baptismal gown and the Cross that I put around her neck... How beautiful was our Georgia!

God’s notion of justice is one thing, and man’s idea of justice is entirely different. God does not desire the loss of a single soul, as long as they acknowledge Him as their Savior and Redeemer.

The event of Georgia’s baptism and her death was narrated to us in a letter by Father Chariton Musungayi [photo] from Goma in the Eastern Congo. 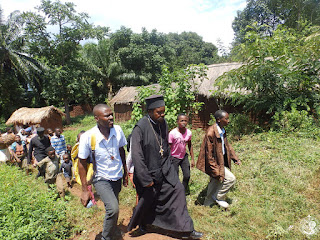 A CLOSER INSPECTION OF EXCUSES - A Sermon for Judgment Sunday

Forgiveness - The Hardest Love of All