Saint Pambo of the Nitrian desert, whose face shone like lightning (July 18)

Orthodox Metropolitanate of Hong Kong & South East Asia
An Egyptian ascetic on the Nitrian mountain, Abba Pambo was a contemporary of St. Anthony the Great and himself great in monastic asceticism.
Born about A.D. 303, he was one of the first to join Amoun in Nitria.  He was illiterate until he was taught the Scriptures as a monk and ordained priest in 340.  He had two characteristics by which he was especially known; by long training, he sealed his lips, so that no unnecessary word passed them, and he never ate any bread other than that which he gained by his own labour, plaiting rushes.
He was like an angel of God and, in old age, his face shone as did the face of Moses in ancient times, so that the monks could not look on it.  He did not give a quick answer even to a simple question, without prayer and pondering in his heart.  At one time, Theophilus, Patriarch of Alexandria, was visiting the Nitrian monks.
The monks begged Pambo to “give a word” to the Patriarch.  The silent Pambo replied, “If  my silence is of no help to him, neither will my words be.”  Abba Pambo was once traveling around Egypt with some monks.  When they came to a group of people who remained seated as the monks passed them, St. Pambo said to them: “Get up and greet the monks, and ask their blessing, for they converse unceasingly with God and their lips are holy.”
This wonderful saint had clear discernment into the destiny of the living and the dead.  He entered into rest in the Lord in the year 374.
Feast Day: July 18.

There was a monk named Pambo and they said of him that he spent three years saying to God, “Do not glorify me on earth.”  But God glorified him so that one could not gaze steadfastly at him because of the glory of his countenance.

— Two brethren came to see Abba Pambo one day and the first asked him, “Abba, I fast for two days, then I eat two loaves; am I saving my soul, or am I going the wrong way?”  The second said, “Abba, every day I get two pence from my manual work, and I keep a little for my food and give the rest in alms; shall I be saved or shall I be lost?”  They remained a long time questioning him and still the old man gave them no reply.  After four days they had to leave and the priests comforted them saying, “Do not be troubled, brothers.  God gives the reward.  It is the old man’s custom not to speak readily till God inspires him.”  So they went to see the old man and said to him, “Abba, pray for us.”  He said to them, “Do you want to go away?”  They said, “Yes.”  Then, giving his mind to their works and writing on the ground he said, “If Pambo fasted for two days together and ate two loaves, would he become a monk that way?  No.  And if Pambo works to get two pence and gives them in alms, would he become a monk that way?  No, not that way either.”  He said to them, “The works are good, but if you guard your conscience towards your neighbor, then you will be saved.”  They were satisfied and went away joyfully.

— Four monks of Scetis, clothed in skins, came one day to see the great Pambo.  Each one revealed the virtue of his neighbor.  The first fasted a great deal; the second was poor; the third had acquired great charity; and they said of the fourth that he had lived for twenty-two years in obedience to an old man.  Abba Pambo said to them, “I tell you, the virtue of this last one is the greatest.  Each of the others has obtained the virtue he wished to acquire; but the last one, restraining his own will, does the will of another.  Now it is of such men that the martyrs are made, if they persevere to the end.”

— Athanasius, Archbishop of Alexandria, of holy memory, begged Abba Pambo to come down from the desert to Alexandria.  He went down, and seeing an actress he began to weep.  Those who were present asked him the reason for his tears, and he said, “Two things make me weep: one, the loss of this woman; and the other, that I am not so concerned to please God as she is to please wicked men.”

— Abba Pambo said, “By the grace of God, since I left the world, I have not said one word of which I repented afterwards.” 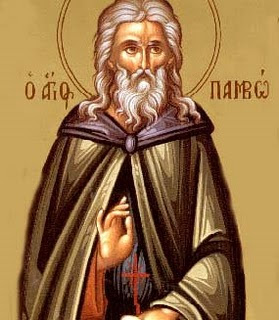 — He also said, “The monk should wear a garment of such a kind that he could throw it out of his cell and no-one would steal it from him for three days.”

— They said of Abba Pambo that as he was dying, at the very hour of his death, he said to the holy men who were standing near him, “Since I came to this place of the desert and built my cell and dwelt here, I do not remember having eaten bread which was not the fruit of my hands and I have not repented of a word I have said up to the present time; and yet I am going to God as one who has not yet begun to serve him.”

— The priest of Nitria asked him how the brethren ought to live.  He replied, “With much labor, guarding their consciences towards their neighbor.”

— They said of Abba Pambo that he was like Moses, who received the image of the glory of Adam when his face shone.  His face shone like lightning and he was like a king sitting on his throne.  It was the same with Abba Silvanus and Abba Sisoes.

— The said of Abba Pambo that his face never smiled.  So one day, wishing to make him laugh, the demons stuck wing feathers on to a lump of wood and brought it in making an uproar and saying, “Go, go!”  When he saw them, Abba Pambo began to laugh and the demons started to say in chorus, “Ha! Ha!  Pambo has laughed!”  But in reply he said to them, “I have not laughed, but I made fun of your powerlessness, because it takes so many of you to carry a wing.”

— Abba Theodore of Pherme asked Abba Pambo, “Give me a word.”  With much difficulty he said to him, “Theodore, go and have pity on all, for through pity, one finds freedom of speech before God.” 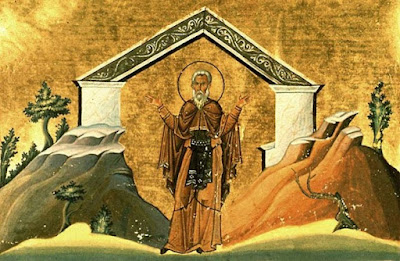 
Venerable Pambo the Hermit of Egypt

Orthodox Church in America
Saint Pambo lived the ascetic life in the Nitrian desert in Egypt. Saint Anthony the Great (January 17) said, that the Monk Pambo by the fear of God inspired within himself the Holy Spirit. And the Monk Poimen the Great (August 27) said: “We beheld three things in Father Pambo: hunger every day, silence and handcrafts”. The Monk Theodore the Studite termed Saint Pambo “exalted in deed and in word.”

At the beginning of his monasticism, Saint Pambo heard the verses from the 38th [39th] Psalm of David: “preserve mine path, that I sin not by my tongue”. These words sank deep into his soul, and he attempted to follow them always. Thus, when they asked him about something, he answered only after long pondering and prayer. He would say, “I must think first, and perhaps I can, in time, give an answer, with God’s help.” Saint Pambo was a model of a lover of work for his disciples. Each day he worked until exhausted, and lived by the bread acquired by his own toil.

The disciples of Saint Pambo became great ascetics: Dioscorus, afterwards Bishop of Hermopolis (this Dioscorus, bishop of Hermopolis, is distinguished from another Dioscorus, an arch-heretic and Patriarch of Constantinople. He lived rather later and was condemned by the Fourth Ecumenical Council), and also Ammonius, Eusebius and Euthymius, mentioned in the life of Saint John Chrysostom. One time Saint Melania the Younger (December 31) brought Saint Pambo a large amount of silver for the needs of the monastery, but he did not leave off from his work nor even glance at the money that was brought. Only after the incessant requests of Saint Melania did he permit her to give the alms to a certain monastic brother for distribution to the needs of the monastery. Saint Pambo was distinguished by his humility, but together with this he highly esteemed the vocation of monk and he taught the laypeople to be respectful of monastics, who often converse with God.

It was said that sometimes Saint Pambo’s face shone like lightning, as did the face of Moses. Yet, speaking to the brethren who stood about his deathbed, Saint Pambo said: “I go to the Lord as one who has not yet begun to serve Him.” He died at the age of 70.


"THE WAY" - An Introduction to the Orthodox Faith