Africa: Slaves of cobalt ― Your Smartphone Is Probably Powered by Child Labor at Mines in Africa !! 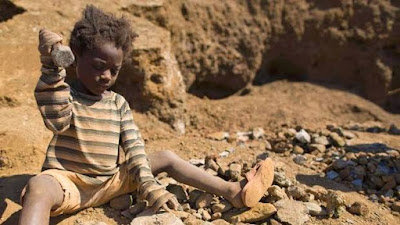 Human rights watchdog Amnesty International has accused several tech and auto industry giants of turning a blind eye to child labor. In a damning report released on Tuesday, the organization found that major brands, including Apple, Samsung, Sony, and Volkswagen, were allowing cobalt mined by children into their products.
Cobalt — a metallic element that is found mostly in minerals — is a key component in the lithium-ion rechargeable batteries that power electronic devices such as laptops, smartphones, and electric cars.
The Democratic Republic of the Congo (DRC), in central Africa, is the world's top cobalt producer, accounting for more than half of the planet's supply. According to the DRC's government, 20 percent of the cobalt exported by country is extracted from mines in the southern province of Katanga.
Much of the cobalt mined in the region is sold to Congo Dongfang Mining International (CDM), a company owned by Chinese mineral company Zhejiang Huayou Cobalt Company Ltd (Huayou Cobalt), which the Amnesty report describes as one of the world's leading manufacturers of cobalt products.

According to Amnesty, the components produced by Huayou Cobalt are then sold on to battery manufacturers in China and South Korea, who, in turn, supply some of the world's top electronics companies.
A 2014 report by children's rights agency UNICEF found that approximately 40,000 children worked in mines in southern DRC, and that many of them were involved in the mining of cobalt.


'There is lots of dust, it is very easy to catch colds, and we hurt all over.'

Amnesty said its report was researched jointly with DRC-based NGO African Resources Watch (Afrewatch). The report is based on interviews of miners working at four sites in the DRC. As part of their investigation, researchers spoke to 17 children, ages 9 to 17. One child said he started working at the mine when he was 7.
Most of the children interviewed by Amnesty worked above ground, collecting ore and sorting through rocks, which they then washed in streams and lakes around the mines.
The children described working gruelling, 12-hour shifts in the extreme heat or in the rain, often for no more than 1,000 to 2,000 Congolese Francs ($1-$2) per day. Some of them explained that their school day was bookended with shifts at the mine, and that they also worked weekends and during the holidays.
Paul, 14, told researchers he also worked underground in the mines, often spending up to 24 hours at a time in unsafe tunnels. "I arrived in the morning and would leave the following morning," he said. 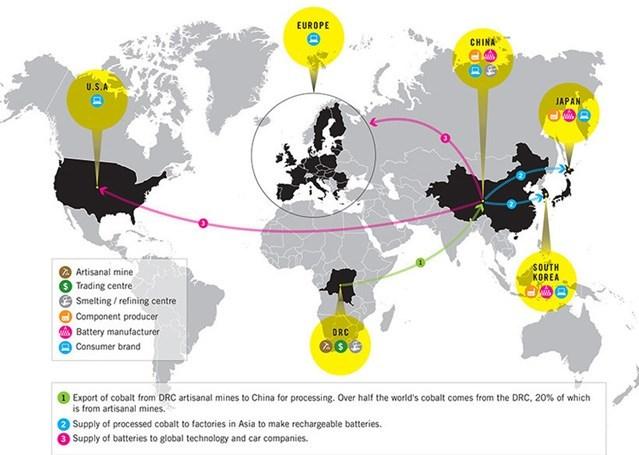 Researchers found that the vast majority of workers in the DRC's mines handle cobalt without wearing any protective gear, such as gloves or facemasks, despite the known dangers of chronic exposure to cobalt dust.
The US Centers for Disease Control and Prevention (CDC) has warned that extended exposure to cobalt dust can result in "respiratory sensitization, asthma, shortness of breath," as well as dermatitis and a serious condition known as "hard metal lung disease."
Amnesty said the children they interviewed complained of frequent illness. "There is lots of dust, it is very easy to catch colds, and we hurt all over," Dany, a 15-year-old miner, told the watchdog.
Amnesty also found that many of the underage miners were malnourished and subjected to "physical abuse, sexual exploitation and violence." Many of the children endured regular beatings at the hands of security guards, who also extorted them for a cut of their earnings. 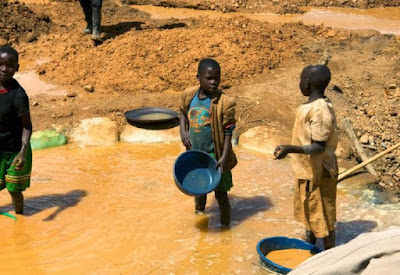 "They asked for money, but we didn't have any... They grabbed my friend and pushed her into a tank containing diesel oil," said Mathy, who told researchers she was 12 at the time of the incident.
In a response published as an annex to the report, Apple said that underage labor was "never tolerated in our supply chain and we are proud to have led the industry in pioneering new safeguards." The company said that it was "actively looking for any violations."
Microsoft said that it did not "tolerate the use of child, involuntary or forced labor" in its supply chain, but added that it was "unable to say with absolute assurance" whether cobalt in its products could be traced back to ore in the Katanga region.
Samsung SDI noted that "up until now, there has been no case of child labor violations reported or detected from Samsung's SDI's plants or suppliers." But like Microsoft, the Korean company also said that it could not determine whether its cobalt supplies originated in Katanga.


Related: How Corporations Are Costing Africa Billions Through Tax Schemes
Belgian Mining Company Accused of Lying About Bulldozing People's Houses in the Congo

"The Looting Machine": If Africa Is So Rich, Why Is It So Poor?
The Orthodox African Church (Patriarchate of Alexandria) denounces the exploitation of Africa by contemporary colonialists
Orthodox Church & Capitalism: Orthodox Fathers of Church on poverty, wealth and social justice
Is capitalism compatible with Orthodox Christianity?

Grace and “the Inverted Pyramid”
The Passion of Jesus Christ and the Passions of Africa
Αναρτήθηκε από ΝΕΚΡΟΣ ΓΙΑ ΤΟΝ ΚΟΣΜΟ στις 2:40 μ.μ.