On Faith: Justice and peace at root of Orthodox churches mission to help the needy

By Orthodox Archbishop Seraphim, Metropolitan of Zimbabwe and Angola
Bread for the World
In the Orthodox Vineyard of Africa 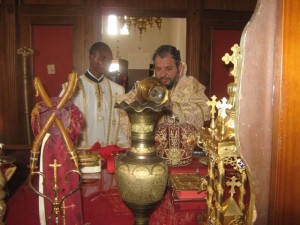 Ordination of an indigenous priest Fr. Nektarios by Archbishop Serafim (photo from this old article).

One of the spiritual roles of our Church is “sharing in our anguish and existential problems, taking upon herself — as the Lord did — our suffering and wounds, which are caused by evil in the world and, like the Good Samaritan, pouring oil and wine upon our wounds through words of patience and comfort (Romans 15:4; Hebrews 13:22), and through love in practice.”
During the last 20 years, I have been involved in mission in Kenya, Tanzania, South Africa, Zimbabwe, Angola, Malawi, Zambia, Botswana, and Mozambique. My personal testimony is that the hunger and poverty in such places is a result of our sins and selfishness. We have failed to use and share the goods of our planet in a fair way as a common gift of God for all of humanity. The number one victims of our sins are the suffering children who die because we have failed to give to them what they need to save their lives.
For the first time in over 1,000 years, many of our Orthodox churches came together at the Holy and Great Council of the Orthodox Church in Crete, Greece recently. Τhe following are excerpts from the final resolutions, adopted by the churches, that emphasize peace and justice in addressing the witness of love and service relative to hunger and poverty.
The centrality of peace and justice informs the Orthodox churches in fulfilling her salvific mission in the world (Ephesians 6:15, Colossians 1:20, Ephesians 2:17, and Ephesians 2:14). Therefore, the Orthodox churches actively care for all people in need, including the hungry, the poor, the sick, the disabled, the elderly, the persecuted, those in captivity and prison, the homeless, the orphans, the victims of destruction and military conflict, those affected by human trafficking and modern forms of slavery. 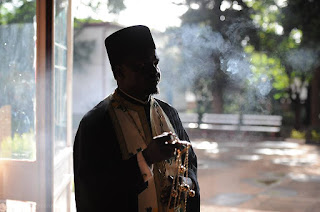 The Orthodox Church’s efforts to confront destitution and social injustice are an expression of her faith and the service to the Lord, who identifies Himself with every person and especially with those in need (Matthew 25:40).
Competition and enmity in the world introduce injustice and inequitable access among individuals and peoples to the resources of divine creation. They deprive millions of people of fundamental goods and lead to the degradation of the human person; they incite mass migrations of populations, and they engender ethnic, religious, and social conflicts, which threaten the internal cohesion of communities. Therefore, the Church cannot remain indifferent before economic conditions that negatively impact humanity as a whole. A sustainable economy is that which combines efficiency with justice and social solidarity.
It is in light of such tragic circumstances, the Church’s great responsibility is overcoming hunger and all other forms of deprivation in the world. One such phenomenon in our time — whereby nations operate within a globalized economic system — points to the world’s serious identity crisis, for hunger not only threatens the divine gift of life of whole peoples, but also offends the lofty dignity and sacredness of the human person, while simultaneously offending God. Therefore, if concern over our own sustenance is a material issue, then concern over feeding our neighbor is a spiritual issue (James 2:14-18).